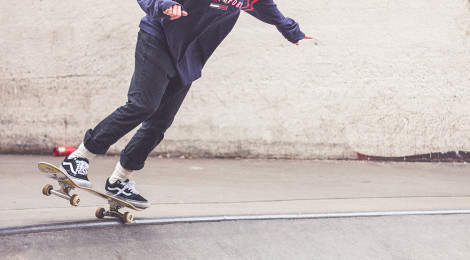 Meet Brujas, the Latina skate crew from the Bronx.

They ride the subway, skate street spots in all boroughs, drink Coconut water, eat pastelitos for lunch and drink 40’s at the courthouse at night. Based in NY, the Latina skate crew Brujas combine skate, art, parties, and life to put on girl skaters of color and Latinas in the Bronx and the Heights. In South American and Caribbean culture, Brujeria describes the work of women healers, saints, and spiritual mentors. The Brujas crew are skate witches rebalancing the streets with their femme energy. When Arianna moved uptown from the Lower East Side in 2009, she would skate from a distance with Sheyla, who had been holding it down since age 12, which eventually gave birth to a crucial sisterhood.

What was going on that made you be like “we need to make a crew”?

Ari: The commercial skateworld, and even the few outlets for girl skaters that exist tend to center white people and culture. Growing up as second-generation Latina, we absorb New York skateboarding and street culture through the lens of a transnational immigrant politic. Brujas, a spanish play off of the cult classic “The Skate Witches,” is about Latina Barrio girl pride. We put forward a vision of a world where women from the barrio, girls like us, are powerful and have agency and channels to express themselves in the streets. As a crew we are aiming to be something in between the Young Lords and Quartersnacks. Revolutionary cosmic Femmes with steelo is how I look at it.

Sheyla: Whenever someone asks me where I’m from and I say the Bronx they’re like oh that’s a “tough” neighborhood, everybody thinks the Bronx is dangerous. The other day these young kids came up to me talking to me about books I should read. I feel like those are the things that people should see from kids from the Bronx. What could encourage more woc (women of color) to skate? If y’all ran the parks would you have any new rules lol?

A: This summer I brought it up with the boys, I asked them what they thought having a day when no boys were allowed in the park. I was telling them that would probably emulate what it felt like to be a girl at a park everyday. I love them because they were like that would be “wave,” just “hard to enforce.” I think the rules I would lay down would benefit everyone:
1) No goons who don’t skate lurking around taking up space and asking you how long you’ve been skating and if you “could ollie.” Its funny most of the disrespect comes from people who don’t skate just lurking.
2) No DM’s, if we want to talk to you we’ll hit you up.
3) NO SNAKING, let girls have their turn.
4) Share and take the time out to teach us new tricks.
5) Verbal encouragement and kindness goes a long way.
6) If you have a shop or company put your girls on it, I’m always surprised at how asleep these boys are at the marketing value of girls skaters, but that’s wack anyway, we should be put on because sponsoring and supporting girl skaters is fundamentally anti-patriarchal. Sheyla: I think when you start filming or shooting, it encourages more women of color who do skate to go harder. Brujas is a place where they can get coverage, a place for them to get footy. We want more girls to really be about that life, to be confident, get sponsors and have a future in skateboarding. But most importantly to have fun and make a difference in the world.

Besides skating, what are y’all getting into to promote the BRUJAS LIFEESTTYLEEE *female young thug voice*?

Sheyla: I’m planning to travel and shoot photos of Latino skaters in central and south america. My whole mentality is to show everything in a positive light, how skaters in the third world are killing it and not getting any coverage.

Ari: We’re both full time college students, but throwing parties is our way to create space for us to just have a good time and celebrate our culture. We play Dem Bow, Merengue, and Bachata and then all the regular pop music. I DJ on the radio and at parties under the alias Baby Loca, and am currently on tour playing Bass with TDE artist SZA. We’re always trying to take our understanding of the world to new levels, adventuring. Who do y’all look up to in skate and life?

Ari: My favorite skaters are John Cardiel, Jake Johnson, Julio Peralta, and Brett Nelson. Mayra Gallegos who rides for SHUT was one of the first women I vibed with who inspired me to take skating seriously. Assata Shakur, OG bruja Gloria Anzaldua, Jazz bassist Peter Dominguez, The Young Lords, Princess Nokia and the Smart Girl Club, are some of the most influential creators in my life.

Sheyla: Photographers like Jonathan Mehring who tours the world and shoots skate photos inspire me to make Brujas a real thing. My favorite pro skater is Javier Sarmiento. I like skaters with drive like George Milanes, Joseph Delgado and Tyshawn Jones. Can I join lol? Nah but forreal where do y’all skate? How can yung admirers linger?

Sheyla: Hit us up to skate. These young girls Hilary and Angie came up to me and were like “hi, my mom used to see you skate when you were younger and we started skating because of that”. We want to shout out all the latina skaters in the world. The homies at 157 and 181, our boys at Casino and Mira Conyo, Autumn (RIP), Slicky Boy and the Dunions, all the LES homies, and all the Brujas already out there rebalancing New York street culture with confidence, steelo, and femme pride. Photos by Apneet Kaur. Fashion model skater journalist who happens to be classically trained in flute and voice by way of India -> CA -> NY.

← Le Comptoir General: A Window to Marginalized Culture in Paris.
Oakland stands with Ferguson & some resources →