Abdullah Saeed, between stints in indie punk bands like The Kominas and Sunny Ali & the Kid, writes for High Times and Weediquette on Vice. He first caught my attention as The Kid- their logo is an outline of Texas with “PAKISTAN” written inside. As a Pakistani from Texas, I’m already very supportive of brown people in the arts, let alone those with logos encapsulating huge parts of my identity. Needless to say, I was pleased to be able to catch up with Saeed, the author of the dope missives who signs his name as “T Kid,” to talk about his alternative career path and share some personal stories.

What came first, journalism or music?

AS: So, sort of two things happened together. I was in Philly freelancing; I did a lot of music coverage for a few different sites. And for a long time, on principle, I refused to use my Muslim-Pakistani heritage as an angle for music, writing, or anything. I never considered myself like an activist or anything crazy, but I do find inspiration from simple rule breaking so I decided to do it. The first thing I did was a blog I ran called Adventures in Pork. For the first time in my life, I started eating pork. I was eating everything I could find and I was writing about it. And it was psychologically kind of difficult because you’re conditioned to think something is really bad, but it really inspired a lot of my best writing because I caught that moment of dissonance. That blog did really well, and I ended up doing the cover story for the Philly weekly because their food issue was on pork.

AS: Right around the same time I met Sunny Ali, and Sunny Ali & the Kid was born. I liked the aesthetics of the cowboy-Pakistani thing. We’re both Pakistanis, and I’d never played directly off that Muslim-Pakistani thing before. So then from there stuff built up more. I ended up working for MTV Desi, playing with the Kominas, and then I went to work for Vice.

Impressive amount of dots being connected! Where does Weediquette fit in?

AS: Weediquette was sort of the outlier. I worked for Vice for about a year and a half, mostly covering electronic music for Noisey, and The Creators Project doing editorial strategy for Thump. While I was there I would freelance and pitch stuff to the other departments. I lost a bag of weed when I was moving, so I wrote a sort of lament and sent it to one of the editors. He thought it was hilarious, and later the weekend editor wanted to make it a regular thing and that’s how Weediquette happened.

AS: It started out as weed etiquette stuff, but then it became stories from my life. I did literally two pieces about “pass to the left” or whatever dumb shit. Then on Thanksgiving I told a story about a previous Thanksgiving where I got my aunt high.

Wow, my aunt would straight up disown me. What keeps you writing about weed in particular?

AS: I think one thing that’s gonna deserve a lot of attention is the idea that we don’t see any downside about legalization. People who smoke were like “I don’t want to be hassled, let’s make weed legal.” More involved people were like “well our prison system is full of black and spanish people who really didn’t do anything wrong, so let’s decriminalize it.” Then there’s the medical community that had their arguments. But the whole idea was that no one saw a downside to it. I think that there’s a lot of danger in completely trusting the authority, which have been completely unjustly prohibiting it and prosecuting people and throwing people into prison for decades, to regulate it. But, you gotta watch the watchmen. I think it is the most important thing. But that doesn’t mean I won’t still be writing stupid stories about this shit.

Abdullah with Brock Berrigan. Photo shamelessly stalked from his Facebook.

What was your first experience smoking weed?

AS: It was in my dad’s garage. I was in high school, 9th grade. I had moved around a lot. I had just come to that school and didn’t know anybody, so I was bored. I definitely actively made the decision because I was curious about weed and I wanted to try it. I was maybe slightly more religious then, and I didn’t want to drink. I rolled it up in the paper from a tea bag, because that was the closest thing I could figure to papers. I smoked it poorly. I remember being really eager for it to work, and sitting there thinking “What’s gonna happen? Wait, if I think about it too much does that mean it’s not gonna happen?”

You said you were slightly more religious, what stopped that?

AS: It’s important to note that my family is not as religious as most other Pakistani families. My mom and me are really tight, and we’ve always had an open discussion about religion. My dad is a really accomplished philosopher. It lent itself to being in a certain environment and made us think about a lot of things. Me and my mom would talk about it and over time it was more and more difficult to rationalize religion in general. 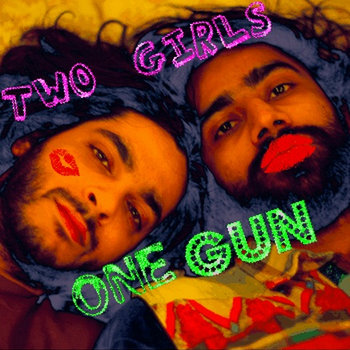 Album Art for “Two Girls, One Gun” by Sunny Ali & The Kid

Do you identify with Pakistani culture?

AS: To a degree. I grew up in Thailand in this International University where my dad was teaching, and it was mad multicultural. My mom always valued that and we’ve always maintained that. After my parents got divorced, we came to the U.S. but we didn’t really like interacting with the Pakistani community that much. It’s stuff that exists in every community, but she wanted us to be friends with people just for the sake of being friends with them, not because they were Pakistani or whatever.

AS: I hang out with a lot of brown dudes now. Sunny and Basim and that whole contingent. They’re the first brown friends I’ve ever had — the first Pakistani because we’re Pakistani kind of thing.

AS: I’m not mad Pakistani, and because of that, I don’t always understand the social cues. I don’t know who to hug and shit. Once in a while I’ll be at a pakistani thing, and to me it’s natural to hug people whether it’s a female regardless of their age, but there’s like a thing about it and it’s mad awkward.

Do you speak or understand Urdu?

AS: Yeah, fluently. I grew up speaking it. I was starting to forget it when I was in my early twenties, then I signed up to be an interpreter. The first thing I did was subtitling for a Pakistani TV show by the same guy who did Dhoop Kinare. The main actress was this woman with a fast talking high voice. My mom was like “oh shit this is awesome.” I was living with her in Philly at the time, and she loved Dhoop Kinare. I subtitled the show, and she helped me. We had a blast doing it.

AS: Then I did a bunch of legal stuff. I was an interpreter for a bunch of Indian ship crew members on a freighter over months. It was basically these Indian ship dudes, and one of the crew members got pissed off at the other. When they docked, he ran to the EPA and said they’re illegally dumping sludge. These guys were being held, it was a bunch of crazy shit. It was like The Wire. And being in intense situations and being a fucking mouthpiece (there were times I couldn’t understand what the fuck they were saying) that really got my shit back on for Urdu speaking.

What’s in store for your Urdu speaking self come 2014?

AS: In the next year I’m gonna be doing pretty much only doing weed stuff. Reporting in Denver for Vice, more stuff for High Times. I’ll be launching my own vertical in the next month or two, it’s going to be simple and awesome, that’s the basic idea. I’m working on a new show as well through an independent production company. More music stuff of course. It’s a big year for weed coverage and a big year for weed in America. Interview by Fatima A AKA @grandvizierto. Fatima is currently a student who seeks to pursue law and health policy. Her hobbies include running, translating poetry/prose, and scouting out local coffee shops.